What Is Space Weather 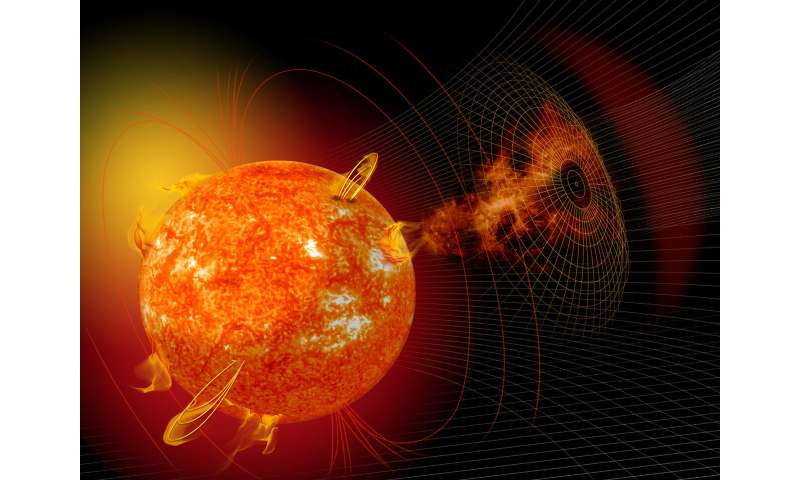 The Sun and the Earth are connected by the solar wind.

Everybody knows what weather is. It shows up as various combinations of sunshine, cloud, wind and moisture. It's powered by the heat of the Sun and it happens in the lower atmosphere. But what about space weather? What could that be? And if we're not astronauts, does it affect us?

Empty space?
In order to understand what space weather is, let's get rid the idea of space as a vacuum. Yes, it's empty compared to what we're used to on Earth. Even the best industrial vacuum is denser than most of outer space. But in order to describe space weather we need to realize that space contains atomic particles, and it contains energy.

Earth and the other planets of the Solar System are located within a vast bubble in space called the heliosphere. This is formed by the outward pressure of the solar wind, which continuously blows from the Sun. The solar wind, which is a plasma, spreads out well beyond the known planets. A plasma is a gas consisting of a mixture of charged particles such as protons (+) and electrons (-).

Space weather could refer to conditions anywhere in the heliosphere, but normally, we're only interested in emissions from the Sun that can affect Earth. We're concerned about what these emissions are doing to the upper atmosphere and to the magnetosphere.

Earth's magnetosphere
Earth is like a giant magnet. We can even measure its magnetic field - the geomagnetic field - at the Earth's surface. However the field actually extends tens of thousands of kilometers into space. And, as we'll see, it's a good thing for us that it does.

The magnetosphere is the part of the geomagnetic field lying between the ionosphere (the top layer of our atmosphere) and the solar wind. It deflects particles from the Sun so that instead of hitting our atmosphere, they're pushed aside.

If we didn't have the protection of the magnetosphere, the solar wind (and other solar emissions) would strip Earth's atmosphere away. This is what happened to the Martian atmosphere after that planet's magnetic field died out.

The Sun's emissions
We know that the Sun gives out heat energy and light energy, and that this energy is produced by nuclear reactions in the core. Yet there's another kind of energy which is essential to space weather, and that is magnetic energy.

An area on the Sun where there are strong magnetic forces is called an active region. This is where we find sunspots, and solar flares occur there. A solar flare is the sudden release of built-up magnetic energy, and it's a powerful explosion. The energy of a large solar flare is equal to several million hydrogen bombs. The energy emitted includes dangerous ultraviolet, X-rays and gamma rays.

Fortunately, the Sun is very large, so only occasionally do these flares come in our direction. This is also true of coronal mass ejections (CMEs). A CME is the release of vast clouds of plasma made up of electrons, protons and atomic nuclei. A huge amount of energy accompanies the plasma as does a shock wave that accelerates the particles of the plasma to very high speeds.

Although most solar flares and CMEs don't affect the Earth, when they come our way we get geomagnetic storms, also called solar storms.

Effects of solar storms
Solar storms don't involve high winds, loud thunder or dramatic lightning. Their most noticeable effect may simply be the triggering of aurorae in the polar regions. Even for strong storms, the damage is done quietly.

The atmosphere shields us from most of the dangerous emissions from space. Although a spacewalk during a solar storm would be disastrous, astronauts in the International Space Station are fairly well protected.

However, our technology is very vulnerable. Solar storms have destroyed or damaged satellites, and caused communications and power blackouts. Since they can disrupt the timing of GPS satellites, this means that everything which depends on GPS is disrupted. This can include your cash withdrawals from an ATM.

The biggest solar storm ever recorded is known as the Carrington Event. It happened in 1859 - before we had satellites, electronics and electricity grids. A 2008 report from the US National Research Council estimated that such a severe storm would today cost the USA at least a trillion dollars during the first year of recovery. And the recovery time would probably be between four and ten years.