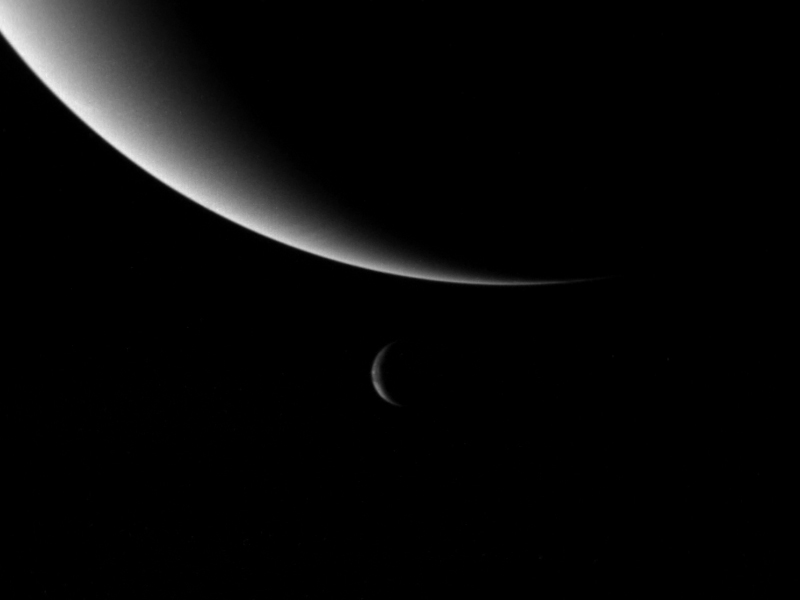 Neptune is at the inner edge of the Kuiper Belt, the last major planet out from the Sun. It has fourteen known moons and they're a mixed bag. One of them – Triton – has over 99% of the total mass of Neptune's moons. Thirteen little moons share what's left. Only two of the moons were discovered before 1981. They all have names from Greek mythology relating to the Greek sea god Poseidon. (The Romans called the sea god Neptune.)

Triton
Triton was the son of Poseidon. His moon is a captured Kuiper Belt object. The Kuiper Belt is an enormous region with millions of icy objects. Some of them, like Pluto, are big enough to be dwarf planets. Triton is not only similar to Pluto, but also somewhat larger.

For a large moon, Triton is odd. When a moon forms along with its planet, it usually orbits in the same direction as the planet's spin. But Triton orbits in the opposite direction – we call this retrograde. Triton's orbit is also highly tilted instead of close above the equator.

Inner moons – crash, bang, reform
When Triton was pulled into the Neptunian system, it caused gravitational chaos. The existing moons smashed into each other and broke up as a disk of rubble above Neptune's equator. After Triton's orbit became stable, new moons formed from the rubble. We don't know what the original moons were like, but now there are seven small moons closer to Neptune than Triton is.

Voyager 2 discovered five of the inner moons in 1989. They were Naiad, Thalassa, Despina, Galatea, and the biggest of the small moons, Proteus. The spacecraft also imaged Larissa, which was detected from Earth in 1981. These five moons have circular orbits and move in the direction of Neptune's spin (prograde).

Proteus is the biggest of the small moons. It's around 400 km (250 mi) across. It's almost massive enough to be spherical, but didn't quite make it. Voyager was able to get a quick image of Proteus. It has a crater named Pharos that's over 150 km (95 mi) across.

In 2013 a seventh inner moon was discovered in Hubble Space Telescope data from 2004. It's between Larissa and Proteus and has been named Hippocamp after a mythical sea monster. The other inner moons range in size from 50-400 km (30-250 mi), but Hippocamp is much smaller. It's probably a piece broken off from Proteus and is only about 18 km (11 mi) across. No wonder nobody noticed it before.

Nereid – homemade or captured?
Neptune was discovered in 1846, and Triton a few weeks later. Considering the distance and small size of the other moons, it's not surprising that it took until 1949 for a second moon to be discovered – Nereid.

The moon was discovered by Gerard Kuiper, whose name would later be given to the Kuiper Belt. He chose the name Nereid for it. The Nereids were sea nymphs, the daughters of Nereus and Doris.

Nereid has a prograde orbit. The orbit is highly eccentric, which means it's a stretched-out circle instead of being round. In fact, it has the most eccentric orbit of any known Solar System moon. Its distance from Neptune varies from about 1,400,000 km (850,000 mi) to nearly 10 million kilometers (6 million miles). This strange orbit suggests that Nereid's a captured object. But other evidence suggests it could have been an inner moon whose orbit was disrupted when Triton was captured.

Since Proteus is bigger than Nereid, you might expect that it would have been discovered first. But Nereid is easier to see than Proteus. Proteus is close to Neptune and covered in a dark, reddish material. Its discovery had to wait for a visiting space probe.

Outer moons – gotcha!
Neptune captured its five outermost moons, Halimede, Sao, Laomedeia, Psamathe and Neso. They're all named for Nereids. They're small, between 40-62 km (25-38 mi) across, with irregular shapes, and their orbits are very eccentric.

Two of these little moons have retrograde orbits, and three have prograde orbits. Psamathe and Neso are farther away from their planet than any other known moons in the Solar System. It takes them over 25 years to orbit Neptune. Their orbits suggest they could be two pieces thrown out from some kind of collision in the Kuiper Belt.