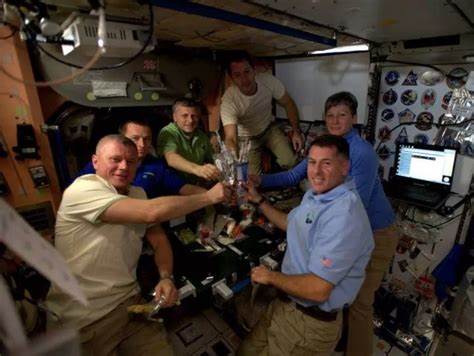 Turkey and dressing (stuffing), cranberries, potatoes, cornbread, green bean casserole, corn on the cob, yams, squash (marrow), pumpkin pie. For Americans at home – or away – these are some traditional Thanksgiving foods. It's a holiday in which family and friends are particularly important. The gifts exchanged are those of love and friendship.

Planning a Thanksgiving meal is quite a job, but what if you were planning Thanksgiving dinner in space? What would be on the menu? You might well imagine that you couldn't manage anything traditional, but in fact space food has come a long way since it was all cubes and tubes.

The first Gemini astronauts had such short flights that they didn't even pack a picnic. For longer flights, planners begrudged space and weight for food, and forbade anything crumbly. Crumbs are a nightmare in space. Although filters may catch most of them, others would end up stuck in equipment or even being inhaled. So the first astronaut food came from tubes or was packaged in cubes. Cookies were covered in gelatin (yuk!) to stop crumbs from escaping.

Now astronauts may spend months on the International Space Station, so food is very important. The astronauts taste a large selection of foods and give preferences well in advance so that specialists can plan food selections that are nutritionally balanced for each one.

Food was always expensive to transport - as is everything going into space - and it still costs at least $10,000 a pound (over 9,000 euros per kilogram). Since food is usually mostly water, you can see why dehydrated foods were attractive to the planners, if not necessarily to the astronauts.

Apollo, and later the space shuttle, used fuel cells for power. Hydrogen and oxygen react in a fuel cell to produce energy which is converted to electrical energy. The product of the reaction is water, which the astronauts drank. However the International Space Station (ISS) gets its energy from solar panels, so water needs to be supplied.

There are some special requirements for food, in addition to its being palatable and nutritious. No space is wasted on a refrigerator, so the food has to keep without it. The packaging must also be as light as possible. Food is heat-treated to destroy microbes and then sealed, but some can be sterilized by radiation, and other food can be dried. Candy and nuts are eaten as is. And supply ships include some fresh fruits and vegetables for quick consumption.

Food tends to taste bland because aroma is the main element in taste, and it diminishes in microgravity. Body fluids rise, giving astronauts puffy faces and what's unkindly – but appropriately – called chicken legs. The fluids also cause congestion that affects the sense of smell a bit like a head cold does.

Seasoning is available to liven up the food, but if crumbs are bad, powders are worse. So salt comes dissolved in water and the pepper is in oil. There is also a good selection of sauces.

If bread is crumby, what do American astronauts put the peanut butter and jelly on? You may be surprised to learn – as I was – that space bread is tortillas. They keep well, aren't crumbly, and apparently they can serve as frisbees if the crew feels playful. (Obviously Mom doesn't come along to tell them not to play with their food!)

The most popular and often-requested food turns out to be dehydrated shrimp, which are plumped up when cooked in a spicy sauce. The least favorite is reputed to be Brussels sprouts. (In any case, foods that tend to lead to intestinal gas are discouraged.)

The food planners don't include special festive meals, but one can be assembled from what's available. In 2011 an American astronaut planned a Thanksgiving celebration for his two Russian colleagues. It included (irradiated) smoked turkey, cornbread dressing (stuffing), corn, green beans, home style potatoes, cranberries, and for dessert, cherry-blueberry cobbler.

What wouldn't be present is anything alcoholic, which isn't permitted. But also no coke or pepsi or any other soft drink. Microgravity and carbonation don't mix well. If you swallow a drink with carbon dioxide in it, the gas will expand in your stomach so you need to get it out. A simple burp will do it on Earth, but apparently in space pretty much anything inside your stomach comes up in what's called a "wet burp". I don't think we want to go into more detail here.

However, with an eye to the space tourist market, an Australian brewery has been testing a space beer which they've named Vostok after Yuri Gagarin's spacecraft. They have been testing it since 2011 with the Zero Gravity Corp that does parabolic flights to give the sensation of free fall. By 2018, they had a satisfactory Guinness-like beer, but have been working on a suitable bottle.

For those on board the space station at Thanksgiving, I imagine that they can be thankful for a job which they enjoy, the fellowship of other astronauts, and the most fabulous views imaginable of Earth. Whether you do or don't celebrate Thanksgiving and wherever you may be, I hope that there is also something in your life for which you can be thankful.

You Should Also Read:
First Orbit - film review
Carrying the Fire - book review
In the Shadow of the Moon - film review