In the Shadow of the Moon - film 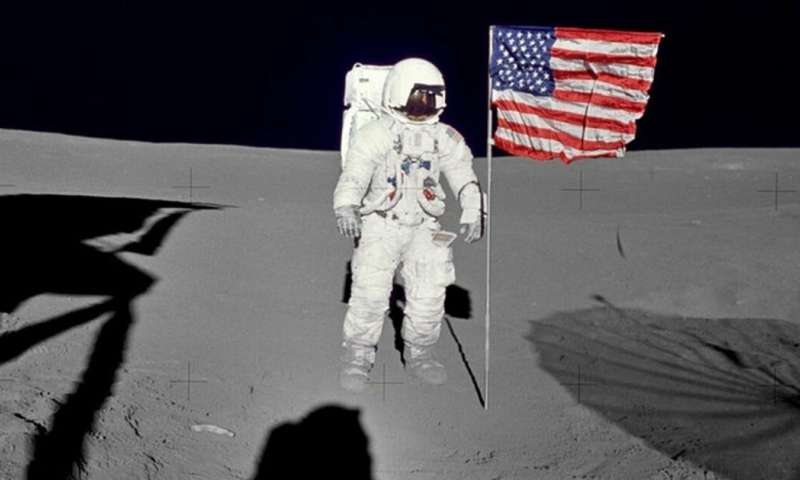 What would it be like to leave the Earth's protective embrace and get far enough away to see it as a sphere in the void? We've seen pictures, but there were twenty-four people who not only saw it with their own eyes, but who also journeyed to an alien world. These are the Apollo astronauts who flew to the Moon.

At the height of the Cold War between the USA and the USSR, the space race became a major arena for a propaganda war. The Russians had launched the first successful satellite (Sputnik), put the first man in orbit and put the first woman in orbit. But the Americans didn't want to catch up, they wanted to surpass the Russians with something so spectacular that it couldn't be topped. President John F. Kennedy set the agenda in a famous speech. "I believe that this nation should commit itself to achieving the goal, before this decade is out, of landing a man on the Moon and returning him safely to the Earth."

The Apollo program was born from this vision and the film In the Shadow of the Moon tells the tale. The trailer for the film asks "Remember when the whole world looked up?" Well, yes, I do, and this splendid British film, directed by David Sington, presents a great story for those who remember the phenomenal worldwide interest – and for those who don't.

There is original NASA footage which had not been seen for decades until Chris Riley, one of the film's producers, found it in a painstaking archive search of thousands of rolls of film. And there are interviews with astronauts, at least one from every mission that orbited the Moon. (The DVD contains a bonus of a further hour of astronaut interviews.)

Adding emotional depth to the documentary footage is Philip Sheppard's music, which captures the mood of a tense and inspiring story without melodrama. One of the most memorable sequences for me was the Apollo 11 launch, which is shown without the roar of the Saturn rocket. The only sound is music which begins with a marimba, followed by a simple string piece, which sounds like a lively American or English folk tune. Near the end the faint echo of a rocket motor fades in. I found it surprisingly evocative. (The DVD also includes a short piece on the scoring of the music.)

Charlie Duke (Apollo 16) put the story into a social context when he recounted, "My father was born shortly after the Wright Brothers. He could barely believe that I went to the Moon. But my son, Tom, was five. And he didn't think it was any big deal."

The story is gripping and there is something special about having the story told by the people who lived it. Of the people who lived it, the most obvious omission from the film was the retiring Neil Armstrong. However his parents appear in a clip from the old TV show I've Got a Secret. The secret was that their son had just been chosen as an astronaut. The host even asked, jokingly, what they would say to him if he were selected to be the first man on the Moon.

As the astronauts look back, it's obvious that they were changed by their experience, especially their feelings about our home planet. Jim Lovell (Apollo 8, Apollo 13) commented, "We learned a lot about the Moon, but what we really learned was about the Earth."

The sight of Earth as a sphere in space made Michael Collins (Apollo 11) think, "My God, that little thing is so fragile out there." Duke was more poetic in his description, recalling that the "oceans were crystal blue, the land was brown, and the clouds and the snow were pure white. And that jewel of Earth was just hung up in the blackness of space." Dave Scott (Apollo 9, Apollo 15) was cautionary when he described Earth as "truly . . . an oasis and we don't take very good care of it." Al Bean (Apollo 12) was the most emphatic, "Boy, we're lucky to live here. I feel blessed every single day."

But the rest of the world was also for a time changed by Apollo. Collins described the way in which the Moon landing united people around the world. He said that everywhere they went, people spoke of the success of Apollo 11 as something "we" did, i.e., we the human race.

If you're interested in spaceflight, In the Shadow of the Moon is an obvious must-see. But if you're not, it's still an engrossing, thoughtful and well-made film which explores one of the defining events of the last century, perhaps of human history.

NOTE: I purchased a copy of the DVD with my own funds.