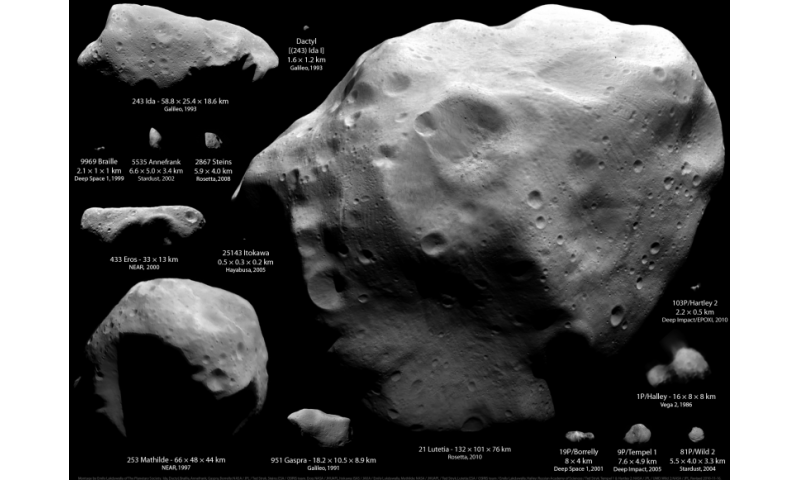 Header image: What are asteroids made of - montage by Emily Lakdawalla

More people have named asteroids than any other type of celestial body. That’s not surprising since the Minor Planet Center of the International Astronomical Union (IAU) has over half a million asteroids in its catalog.

Overseeing asteroid names
How do asteroids get their names?

The IAU has a working group called the Committee on Small Body Nomenclature (CSBN). It’s responsible for asteroid names, so it’s pretty busy, though not as busy as you might think. First of all, the group doesn’t name the bodies. It just has to approve proposed names, taking care that they are within the guidelines.

Secondly, only about 5% of the cataloged asteroids have names. The danger of asteroids colliding with the Earth has prompted the use of robotic telescopes to hunt for them. Projects of this sort have found asteroids in such large numbers that the CSBN has limited the number of names any group or individual can submit to no more than two every two months. Most of discoveries will not get names.

By the way, despite what you might see on the internet, you can’t buy the right to name an asteroid – or any other heavenly body. It is fraud if a company suggests that a name you register will get official recognition.

Identifying nameless asteroids
When a new asteroid is reported to the Minor Planet Center, it gets a provisional designation, for example, 1999 RQ36. The first part is the year, and the rest is a code showing the half-month period of the discovery and the new asteroid’s place in the order of discoveries for that period.

Only when the orbit of the new object is confirmed does the Center give it a number. Asteroid numbers are sequential, beginning with the very first discovery made by Giuseppe Piazzi in 1801. Ceres is number 1, but recent discoveries need six-digit numbers.

Naming guidelines
There are some limitations on acceptable names, relating to length and presentation. In addition, names of commercial enterprises aren’t accepted. Obviously, the name mustn’t be offensive, and an asteroid can’t be named for people known primarily for politics or military activity until they’ve been dead for 100 years.

There are further restrictions on names for asteroids outside the main belt. For example, the asteroids that share Jupiter’s orbit are called Trojans, and those that are named individually are named for heroes of the Trojan War.

There is also one other rule, one which I find slightly odd. Although comets are named for their discoverers, those who discover asteroids may not name them after themselves.

Naming – past and present
The present designation and naming system evolved during the twentieth century. Way back in Piazzi’s day, there was no IAU. Yet to get a name accepted, the discoverers needed to convince the wider community. Piazzi, who worked at an observatory in Sicily, called his discovery Ceres Ferdinandea. Ceres was the patron goddess of Sicily and Ferdinand was the king of Sicily, Piazzi’s patron.

The rest of the world could have ignored Piazzi’s choice. A group of German astronomers was calling it Hera (Zeus's wife), which rather annoyed Piazzi. But even Piazzi’s supporters thought his name was too long, not to mention political. However Ceres was acceptable and as the first asteroid to be discovered, its official name is now (1) Ceres.

The next several asteroids were also named after classical goddesses. When people began using non-mythological names, they kept up the tradition of using female names. In fact, the first asteroid to be named for a man was number 54. It was named for the great scientist and explorer Alexander Humboldt. However it didn’t become (54) Alexander, but (54) Alexandra! The custom of using either feminine – or feminized – names continued unbroken until (334) Chicago, but even after that it persisted for a long time.

Finally, people started choosing all kinds of names for their asteroids, including those of their pets, something that is now discouraged. The lists contain asteroids named for family members of the discoverer, scientists, artists, humanitarians, pop stars, fictional characters and many others.

The Massachusetts Institute of Technology (MIT) Lincoln Laboratory has discovered tens of thousands of asteroids through their Lincoln Near-Earth Asteroid Research (LINEAR) program. One of them was (101955) 1999 RQ36, which is the target of a NASA sample return mission launched in 2016. The lab allowed the Planetary Society and NASA to use its naming right to sponsor a competition for young people to name the asteroid.

On May 1, 2013 the winning name was announced. A nine-year-old from North Carolina suggested the winning name, Bennu. Bennu was an ancient Egyptian deity, which is quite appropriate, since the spacecraft is Osiris-Rex. The sample arm and solar panels of the spacecraft reminded the young man of a heron – and Bennu was usually depicted as a grey heron. So the asteroid is now officially (101855) Bennu.


You Should Also Read:
Naming Planets
Meteor or Meteorite & Other Posers
Young Astronomers Reveal the Universe