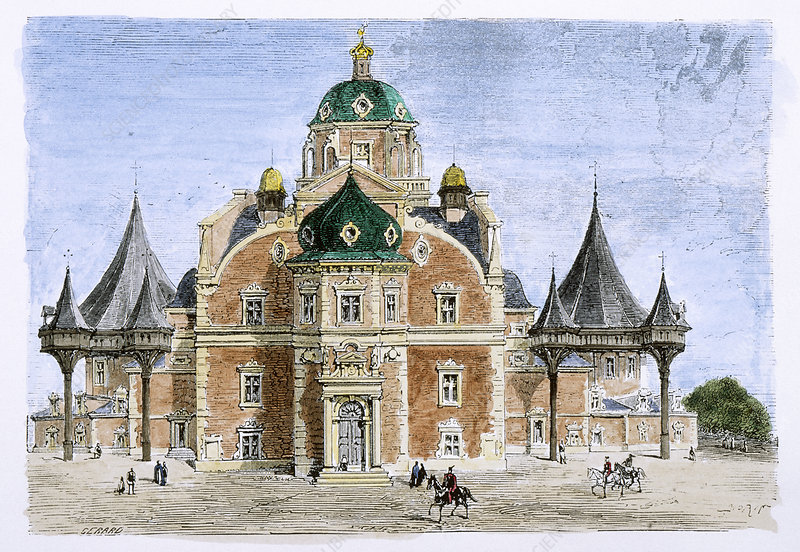 Uraniborg, Tycho's observatory and research center on the island of Hven

Tycho Brahe was one of the greatest observational astronomers that ever lived – probably the greatest of pre-telescope days. Tycho was also a larger-than-life character: a nobleman with a brass nose, publisher, pharmacist, alchemist and Imperial Mathematician.

Tyge Ottesen Brahe was born in 1546 into the Danish nobility at the family home Knudstrup Castle. Tycho Brahe is the latinized form of his name which he adopted as a teenager, since Latin was the international language of the educated. He was known as Tycho.

Oddly, he was not brought up in the family home, but in the household of his father's brother. His uncle Jorgen was well off, but childless. He ensured that his foster son received a good education, one that was aimed at a career in government. But Tycho had became fascinated by astronomy.

Tycho's education began at the University of Copenhagen, though he also studied at several German universities. It was at one of these that he lost part of his nose in a duel. Afterwards he wore a prosthetic metal nose.

It would be literally true to say that Tycho's astronomical career began with a bang. In November 1572 he saw a bright star where there hadn't been a star before. He called it stella nova, Latin for new star. We now know that it was a supernova, the enormous explosion of a massive star at the end of its life. This one was so bright that for a few weeks it was visible during the day.

Tycho observed the changes in the supernova for about a year, carefully recording his observations. He then published it as his first work De Nova Stella.

His reputation grew. The Danish king Frederick II was so impressed with Tycho and anxious to keep him in Denmark that he made available to him the resources of the island of Hven and funding for an observatory.

The result was Uraniborg, which means “Urania's Castle?. (Urania was the muse of astronomy.) It was an observatory, a palace, a laboratory and a research institute. Scholars came from around Europe to research in astronomy and a number of other disciplines. Tycho himself was interested in alchemy and medicines, so Uraniborg included laboratories.

The designer and builder of the astronomical instruments was Tycho himself. He made regular observations, for many years assisted by his younger sister Sophia. She also had become interested in astronomy, though she is better known as a horticulturalist and chemist.

When the king died in 1588, Tycho did not find Christian IV so favorable to his work. After a falling out, in 1597 he took his instruments and moved to Prague. Rudolph II, the Holy Roman Emperor, welcomed him and appointed him to the job of Imperial Mathematician.

Tycho Brahe died in 1601. A well known story claims that he died of a burst bladder because it wasn't considered good manners to leave the banqueting table. However burst bladders are very rare and usually result from a physical trauma. His symptoms suggest it was more likely a bladder infection.

Tycho's body was exhumed in 1901 and purportedly, there was a large quantity of mercury. Some people speculated about how Tycho ingested the mercury, including suggesting he was murdered. Yet in November 2012 researchers from Aarhus University in Denmark announced the results of their tests following his exhumation in 2010. They said there wasn't enough mercury in his beard hairs for him to have died of mercury poisoning and in fact, there was a fairly low amount in the final five years or so of his life.

However Tycho's influences on modern astronomy continued after his death.

In sixteenth-century astronomy, Earth was the center of the cosmos, i.e., a geocentric system. It was based on the ideas of second-century astronomer Ptolemy, and by the sixteenth century, it was obvious that the theory didn't match observations.

Fortunately, there was a new idea to consider, that of Copernicus in his De revolutionibus orbium coelestium (On the Revolutions of the Celestial Spheres). He had proposed a heliocentric theory, meaning the Sun was at the center.

Tycho rejected the Ptolemaic system, but wasn't ready to accept the Copernican one. He proposed that the planets orbited the Sun, but the Sun and Moon orbited the Earth. (He was right about the Moon.) The Tychonic system was a popular compromise in the seventeenth century.

These theories could be tested with long-term accurate observational data. Tycho was the only person who had ever collected such data. He had, in fact, hired a young mathematician named Johannes Kepler to help him analyze it, expecting that it would support his own theory. Kepler thought otherwise, but was nonetheless anxious to find out.

When Tycho died suddenly, Kepler took off with the observational data. He did return it to Tycho's heirs, but not before extracting what he needed.

Kepler found the data almost fitted a heliocentric system, but not quite. He had too much respect for Tycho to blame the data, so he persevered until he had the inspiration that was the key. Everything worked if, instead of circles, the orbits were ellipses.

Ironically, although Tycho's brilliant observations were the means for overturning the Ptolemaic system, but also ensured that his own theory was quietly forgotten.