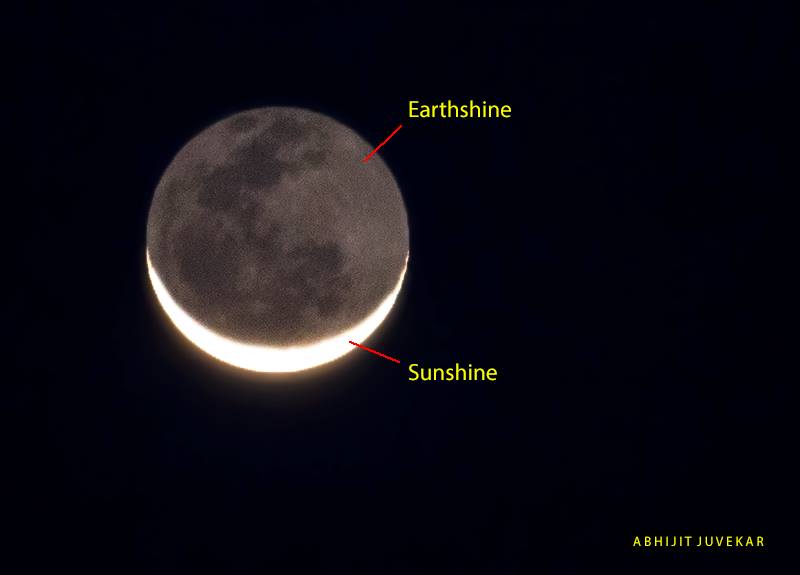 The Moon seems to be a shape-shifter as it makes its monthly orbit. In the darkness of space we see only the part of the Moon that the Sun illuminates. But sometimes there's a bright crescent Moon with what looks like a ghostly shadow filling in the rest of the Moon's face. What allows us to view the Moon's night side, and how might this phenomenon help detect life on distant planets?

Phases of the Moon
The Sun lights up half the Moon. How much of this illuminated half we see depends where the Moon is in its orbit. This is why the Moon has phases. For example, when we can see the entire day side of the Moon, we have a "full Moon". If only half of the Moon's day side is visible to us, we see a "half Moon".

Crescent Moon and earthshine
There may be a strange and beautiful sight when the Moon is a thin crescent. As shown in the header image, both the bright white sunlit crescent and the bluish gray color of the Moon's night side are visible. It's often called the “old Moon in the new Moon's arms.”

Leonardo da Vinci in the sixteenth century was the first to explain what was happening. When the Moon shines by reflected sunlight, we call it moonshine. But sunlight also reflects off the Earth and onto the Moon, and this called earthshine. When the Moon is in the thin crescent phase, it may be lit both by sunlight on its day side and earthshine on its night side.

As seen from the Moon, the Earth has phases. When the Moon is a thin crescent, the Earth is nearly full. That means there's more light reflected off the Earth, there's a greater lunar area illuminated, and there's not much direct sunlight on the Moon to swamp the earthlight. As the Moon moves in its orbit, its sunlit portion grows, and that of the Earth shrinks.

Earthshine and Earth's albedo
Earth's albedo is the fraction of the received sunlight that is then reflected. It's affected, for example, by snow and ice, which is more reflective than water or vegetation. However the main factor affecting the albedo is cloud cover – it accounts for about half of it. Monitoring the albedo tells us something about Earth's energy balance and whether it's changing. All clouds reflect solar radiation, so that increases the albedo. However it doesn't mean that all clouds cause cooling, for some of them trap more heat than they reflect.

In the past, the albedo was assumed to be fairly constant, but there wasn't much data to support or refute that. In recent years there have been studies of the albedo. Scientists have used both satellite data and earthshine data, and they've found significant variation in the albedo. It's not yet clear how these changes fit into climate models, but at least data is now becoming available.

Planetshine and ringshine
Earthshine is just one example of planetshine, a planet lighting the dark side of a moon by reflected sunlight. Space probes have imaged moons of Jupiter and Saturn when they were lit by planetshine. The Cassini probe, in particular, has provided a number of images of portions of Saturn's moons made visible by planetshine.

Search for terrestrial planets
We'd expect planets orbiting other stars also to reflect the light of their suns. Two space agencies were planning missions which could detect this planetshine, and search the spectra for oxygen, water, methane and other substances associated with living things on Earth.

Detailed planetshine observations were part of the preparation for these missions. They intended to study the spectrum of earthlight in order to compare it to features on extrasolar planets. However both NASA's Terrestrial Planet Finder and the Darwin mission of the European Space Agency (ESA) were canceled.

Have a look
Try to find a thin crescent Moon and see if its night side is illuminated by earthlight. Although earthlight is much weaker than sunlight, nonetheless observers with binoculars can see a number of features on the lunar night side. In the northern hemisphere the best viewing is in the evening twilight in spring or the morning twilight in autumn.