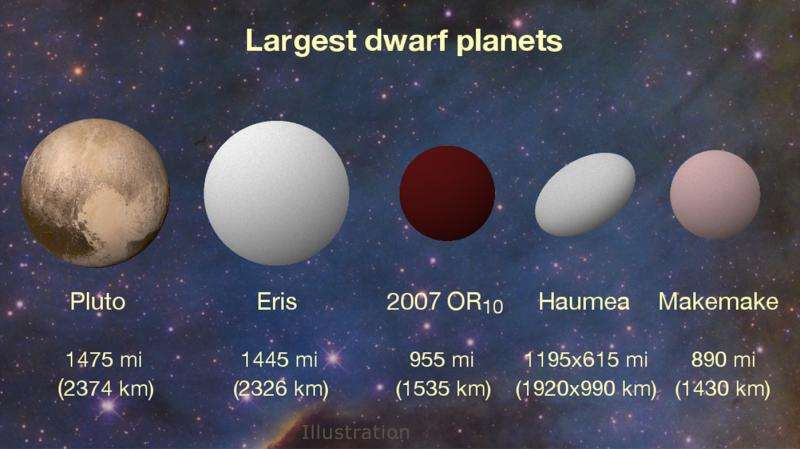 Eris is a dwarf planet, only slightly smaller than Pluto. Mike Brown, Chad Trujillo and David Rabinowitz discovered it at Palomar Observatory. They had already found other trans-Neptunian objects (TNOs), i.e., objects orbiting beyond Neptune. But it caused a sensation when Brown and NASA announced the new discovery as a tenth planet, on the basis that it was bigger than Pluto. This seemed to be true at the time.

Discovery
Eris was discovered in 2005 after a new analysis of 2003 images. The Minor Planet Center of the International Astronomical Union (IAU) gave the new object the provisional designation 2003 UB313.

Although they found 2003 UB313 in January 2005, there was more to come. In October Mike Brown and a team at Keck Observatory in Hawaii used adaptive optics to image Eris. This technique corrects some of the image blurring that our atmosphere causes, and it showed that Eris had a moon.

Yet if being the tenth planet was a sensation, an even bigger one was the IAU deciding to define what a planet was. Some people are still annoyed by their decision, because planets ended up as something for which neither Pluto nor Eris qualified. They both became dwarf planets when the definitions were approved in August 2006.

What's in a Name?
The two new discoveries couldn't get names until the IAU sorted out its definitions, because different categories of object have different naming conventions. Meanwhile the discovery team called the new “planet” Xena after an American TV series Xena Warrior Princess. Xena's sidekick was Gabrielle, so that's what they called the moon.

When Eris was officially a dwarf planet, the Minor Planet Center gave it the number 136199, and the discovery team was allowed to propose names for it and its moon. From Greek mythology they offered the name Eris for the dwarf planet and Dysnomia (Eris's daughter) for the moon. Appropriately, after all the fuss that followed their discovery, Eris was the goddess of strife and discord, and Dysnomia the spirit of lawlessness.

Dysnomia
Dysnomia orbits 37,350 km (23,200 mi) from Eris in a nearly circular orbit taking almost sixteen days. No one knows how big the moon is, but there are several estimates based on how much light it reflects. Unfortunately, no one knows that either. Mike Brown says the moon is 500 times fainter than Eris and suggests that therefore it may be 100 km (60 mi) in diameter. Based on different assumptions, it could be as big as 250 km (150 mi) in diameter.

Without knowing its size, nonetheless the moon was useful. In you want the mass of a distant planet, you can't put it on a giant weighing scale. But if it has a moon, scientists can calculate the mass based on the orbit of the moon. As it is, we have a good value for Eris's mass, and that's how we know that it's more massive than Pluto.

Eris's orbit
The Kuiper Belt is a broad belt of icy bodies orbiting beyond Neptune at about 30-50 AU. (The astronomical unit (AU) is equal to the Earth-Sun distance.) Pluto is there, but Eris is in the scattered disk. Objects in the scattered disk were scattered by the gravitational influence of Neptune in the early Solar System. They were thrown into highly tilted and elongated orbits.

It takes 558 Earth years for Eris to orbit the Sun on a path that's inclined 44° to the ecliptic plane. The ecliptic is the plane in which most objects in the Solar System orbit. Here is a comparison between the orbits of Eris, Pluto and three outer planets. The parts of orbits below the ecliptic are shown in darker colors. The diagram on the left is a polar view.

At its closest to the Sun, Eris is 38 AU away. It's sometimes closer in than Pluto is. But its most distant point is 98 AU from the Sun. Although there are over three dozen trans-Neptunian objects whose average distance from the Sun is greater than that of Eris, at the time Eris and Dysnomia were discovered, they were the most distant known natural Solar System objects, except for long-period comets.

A year is centuries long on Eris, but a month is scarcely sixteen days, and a day is only two hours longer than an Earth day, 26 hours.

From Eris's density, scientists conclude that it's a rocky body surrounded by an ice mantle about 100 km (60 mi) thick. Topping it off is a thin (maybe less than 1 mm) surface layer, which is a mixture of frozen nitrogen and methane. According to models of planetary formation, Eris should have a thicker ice layer, but it may have been lost in a large impact. An impact may also have formed its moon as one did our own Moon.

Temperature and atmosphere
There are a number of estimates for Eris's varying temperature. One calculation suggests that during its year the temperature ranges from -243°C to -217°C (-405°F to -359°F).

Contrary to appearances, Eris probably has an atmosphere, but in an unexpected place: on the ground. Eris is so far from the sun that the atmosphere has collapsed and frozen, and is glazing the dwarf planet's surface. It makes Eris almost as bright as Saturn's moon Enceladus, and 96% of the sunlight it receives is reflected back into space. In about 250 years, Eris will be at its closest to the Sun, with enough heat for its frozen gases to sublimate, i.e., turn directly from a solid to a gas. Then it should have an atmosphere again.

You Should Also Read:
Kuiper Belt
Ecliptic and Equinoxes
Eris and Pluto - They're Not Twins