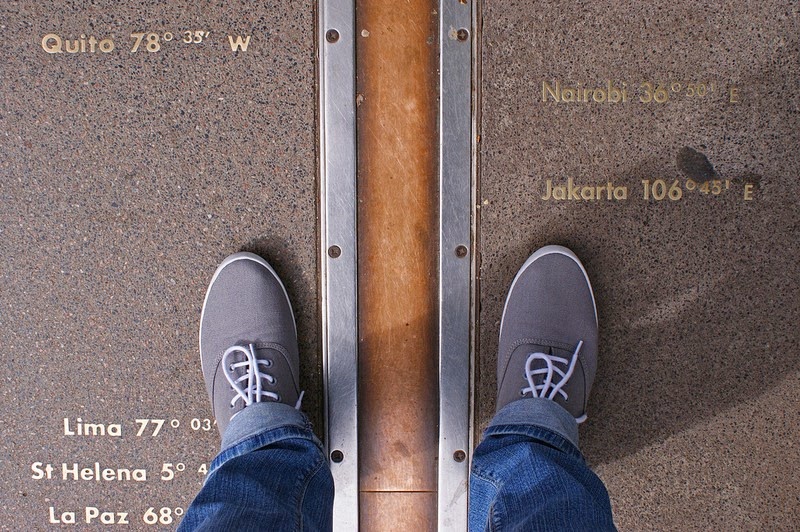 The header image shows a visitor as the meridian with one foot in the western hemisphere and the other in the eastern.

What is a prime meridian?
We have a geographic coordinate system for the Earth that lets us locate a place using two sets of numbers. Latitude shows how far north-south it is and longitude how far east-west. A line of latitude is called a parallel and a line of longitude is a meridian.

The Equator, which divides the Earth into northern and southern halves, is the zero of latitude. The other lines of latitude parallel the Equator and show the angular distance north or south from the Equator. Meridian lines go through both poles and divide the Earth into equal halves. They converge at the poles, and since geographically, there's no obvious starting point, one has to be chosen to be the prime meridian with zero longitude.

Too many prime meridians
Historically, there have been dozens of prime meridians. Maps and navigation charts weren't standardized, and countries tended to choose a prime meridian that went through – or near – that country. In addition, time was reckoned on local Sun time. After all, few people ever went very far from home.

But in the nineteenth century the world was changing rapidly. It was, in a way, getting smaller. Ships commonly traveled longer distances, and they needed accurate charts. It was not only difficult, but dangerous, for sailors to translate from one coordinate system to another. And on land, the railways that linked wide areas needed standardized time-keeping.

In 1850 the USA, a country spanning a continent, made Greenwich the official reference point for its marine navigation and international communications. But the most important step forward was the International Meridian Conference held in Washington, DC in 1884. The twenty-five nations represented agreed to make the Greenwich Meridian the zero of longitude and the reference standard for time. Geographically there was no obvious prime meridian, yet in practical terms, charts based on the Greenwich meridian were already used by over 70% of the world's commerce.

The Greenwich meridians
An observatory needed a meridian, because a transit telescope set up along a meridian could be used for accurate positional measurements of heavenly objects. And since the Sun would cross the meridian at local noon, it was also a reference point for time-keeping.

The instrument known as the Airy Transit Circle (a meridian telescope) was installed by the Astronomer Royal Sir George Airy in 1850. Its meridian became the Greenwich Meridian and the British reference for time. This was the meridian adopted by the Meridian Conference as the Prime Meridian of the World.

Visitors to Greenwich may be confused by multiple meridians, but of course there were Astronomers Royal before Airy who set up transit instruments and established meridians. The meridian of Airy's predecessor James Bradley had defined the Greenwich Meridian for several decades. Interestingly, the Bradley Meridian is still used by Britain's national mapping agency, the Ordnance Survey, as the zero of longitude.

The Airy Meridian is at longitude 0°0′5.3″W
If you're in Greenwich at the old observatory you can see the Airy Transit Circle and, as in the header image, a stainless steel strip marking the Prime Meridian. By definition, Airy's Transit Circle lay at longitude 0°, but not any more. It's been obvious for some while to those with GPS that this meridian line is not at 0° longitude, but at 0°0′5.3″W, about 102 meters (334 feet) east of the 0° reading.

There were various ideas about why the Airy and GPS meridians differ, but the puzzle wasn't solved until 2015. A research paper assessed the main attempts to explain the discrepancy. They were dismissed, except for one that does exactly account for the difference, which is the deflection of the vertical.

The deflection of the vertical
In order to install a transit instrument correctly they used to use a plumb line to establish the vertical.

If the Earth were perfectly spherical and its gravity field the same everywhere, all plumb bobs would point to the center of the Earth. But this isn't the case. Gravitational force is related to mass, so for example, it's increased by nearby mountains. The deflection of the vertical is the difference between a local vertical taken by plumb line and a line that would go through the center of the Earth.

Since you couldn't map every bit of the Earth, surveyors used mathematical models to get the best fit between the actual Earth and a spherical Earth of uniform density. The data for these models came from astronomical measurements.

However in the twentieth century the astronomical measurements got more sophisticated, and satellites have been used since 1984. Their measurements are made with reference to the center of the mass of the Earth and not, as in the past, local verticals. Although the system still models the Earth, it does so more precisely.

It appears that the local gravity field at Greenwich – even though there aren't any nearby mountains – doesn't pull straight down. The deflection from the vertical is small, but in the 21st century is noticeable to people with smart phones.