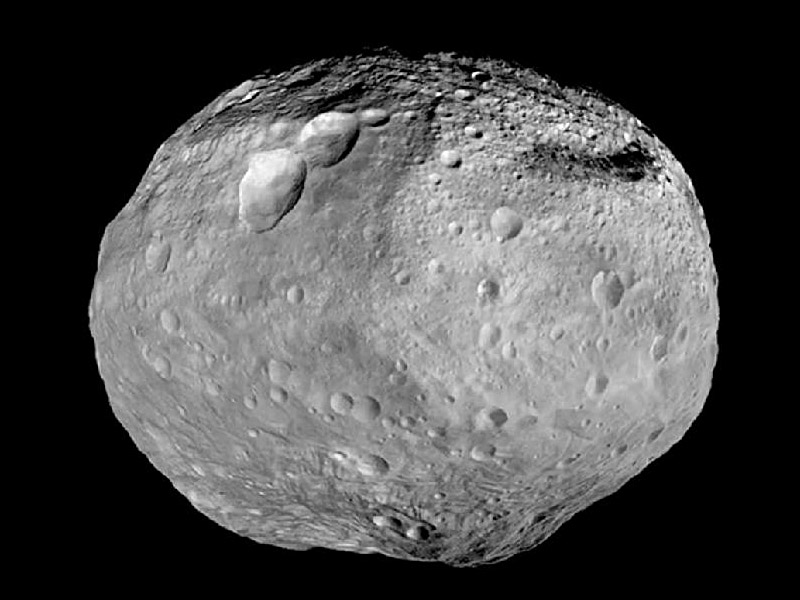 NASA's Dawn mission spent 14 months orbiting Vesta in 2011-12. Vesta is one of the millions of objects in the asteroid belt, a region of small solar system bodies circling the Sun between the orbits of Mars and Jupiter.

German astronomer Heinrich Olbers discovered Vesta in 1807.
Vesta was the fourth asteroid to be discovered, and was named for the Roman goddess of home and family. It's now officially 4 Vesta, as asteroids are numbered in the order of their discovery.

At first, these small bodies were thought of as planets.
But then more and more were discovered in similar orbits. William Herschel called them asteroids which means starlike. When he looked at planets through a telescope, he could see the disk of a round body. The new objects didn't have disks, making them look more like stars.

Vesta has long years and short days.
Vesta takes 3.6 Earth years to orbit the Sun. Its day is 5 hours and 20 minutes long.

Vesta is the second biggest object in the asteroid belt.
Vesta isn't round, but on average, it's 525 km (336 miles) across. That's less than half the size of Pluto's moon Charon.

Vesta is the only member of the asteroid belt that's bright enough to see without a telescope.
However, you'd need know where to look for it in a clear, dark sky.

Planets and moons and other bodies form out of material left over from making a star.
A star is made from the gas in a collapsing nebula. The leftover material from the star orbits in a disk. Around 4.5 billion years ago the bits of this material orbiting the Sun started sticking together and getting bigger. As they kept bumping into each other, the bits got even bigger. At some point, the disk had lots of protoplanets. These were like miniature planets, and some of them were rocky. Many of the rocky protoplanets combined to make rocky planets. But others collided with so much force, they broke up into asteroids.

Vesta is the last rocky protoplanet.
Vesta is evolved. That means it isn't just a lump of rock, but it has layers and complex geology. When Vesta was forming it was hot enough to melt. The heaviest stuff sank to the middle, so – like Earth – Vesta has an iron core. The lightest material rises to the top and makes the crust, and the mantle is in between the core and the crust. Vesta is the only rocky protoplanet left, and it has many things in common with Earth and the other rocky planets.

Vesta survived some big collisions – and there are big craters to prove it.
Vesta has a number of craters that are over 150 km (nearly 100 miles) wide. One of its craters, called Veneneia, is 400 km (250 miles) across and 12 km (7.5 miles) deep. A crater that size on Earth could easily contain London and Paris and everything in between them.

One collision took such a big piece out of Vesta that it has an irregular shape.
A billion years ago a massive collision took the big chunk out of Vesta that left the crater Rheasilvia at the south pole. Rheasilvia is over 500 km (310 miles) wide and 19 km (12 miles) at its deepest. The impact was like an explosion. Shock waves went through Vesta's crust and mantle, and broke through the crust 400 km away. It left dozens of steep canyons around the equator. The biggest one is Divalia Fossa. Although Vesta is a very small body, Divalia Fossa is 465 km (290 miles) long, which is slightly longer than the Grand Canyon on Earth.

There are meteorites on Earth that came from Vesta.
Long before NASA's Dawn mission went to Vesta, some astronomers used special gadgets on their telescopes to find out what the surface of Vesta was made of. They found something surprising. The crust material was the same stuff as a large group of meteorites that had been found on Earth. These meteorites came from the impact responsible for Rheasilvia.

The tallest mountain in the Solar System is on Vesta.
At the center of Rheasilvia is a mountain whose top is about 22 km (nearly 14 miles) above the land around it. It's slightly taller than Olympus Mons on Mars and over twice the height of Hawaii's Mauna Kea from base to summit.

As the last rocky protoplanet, Vesta is helping to fill in some of the blanks of the origins of the Solar System.