The Nintendo Wii is the most inexpensive of the current generation of gaming consoles. At only $250, it provides motion sensing controllers which are great fun - and 480p graphics which aren't as good as our other two systems. 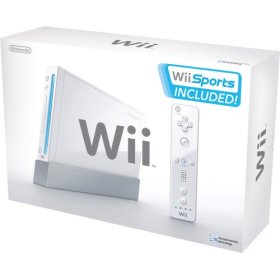 The Wii is designed around a menu of "channels". These make it very easy for even a non-gamer to start using the console quickly. There is of course the game-playing channel, where the Wii will play any Wii or GameCube game. Simply load the disc in and go - it's a simple front-loading "slot", no carriage to break. There is a Mii channel where you set up a profile and avatar to connect to all your game playing, with many cute options. You can even make your Mii thin or thick. The Photos channel lets you look at photos on your TV, although its loading options are limited. Other channels for news, weather, and online shopping require an interent connection, and at least at launch aren't available yet.

The system does NOT have a regular network cable port, which both the PS3 and XBox 360 have. Instead, it works with built in wireless or with a USB network adapter. I am a firm proponent of wireless - less clutter! So I am thrilled that they offer wireless automatically. With the PS3, you have to pay the extra $100 for the 60 gig unit to get this built in. The XBox 360 doesn't have it at all. We had our wireless up and running in about 5 minutes.

It's hard to generalize gameplay on any console - it really depends on what games you buy. That being said, the comes-with-it software of Sports is really quite fun to play and is about as basic as you can get. We've had 8 year olds and adults try it out and really enjoy it. You swing at baseballs, lob tennis balls, bowl, box and play golf. A "fitness" mode puts you through a variety of tasks and then calculates your fitness age, sort of like how Brain Age keeps track of your mental age. If you did both every day, you could aim to be as fit mentally and physically as possible!

In a world where video games = couch potato, it really is quite amazing to have a game where it natively expects you to move and be active. You don't lounge back and gain pounds here while playing games. Boxing can be quite strenuous, jabbing, blocking and weaving in real life. Tennis involves quick reflexes and strong arm movements. Bowling might be the most relaxed of the sports, but even there you are standing, moving, swinging. You get your heart going at least a little, and get some exercise. My boyfriend found his arms were sore after a few hours of fun gaming.

The 480p resolution is certainly not high def 1080p like our other two systems. It's something you accept when you're paying such a low price for the console. But really, it's not that big a deal. I still play the old Zeldas and love them for their gameplay, even though you can't see the pores in Link's face. If they are going for the cartooney characters and environments, 480p is DVD quality and is quite good. If you really, really crave high definition super realism in your games, then the Wii might not be the best choice for you. However, if you're fine with playing games with a more impressionist / cartooney look to them, the 480p can show that quite nicely. For example, in Wii baseball, there aren't fans in the bleachers - just colored blocks.

Nintendo has always been known as a "Kid's Console" - but I really do think with the Wii that they have become a "Family Console". It's not just kids who will enjoy this. Seniors can have fun bowling without knowing anything "Tricky" about how to use a video game unit. It's very intuitive. Moms can easily play with their kids, each with their own Wii profile. Adults having parties can have fun passing the controllers around. Family groups can share slideshows on the big screen while hanging out and drinking wine.

With the price tag being so low, a gaming household that "needs" a higher end system can easily save up their money to get that XBox 360 or PS3 - and still be able to justify the $250 to get a Wii for the fun, casual gaming stuff to share with their non-gaming friends.