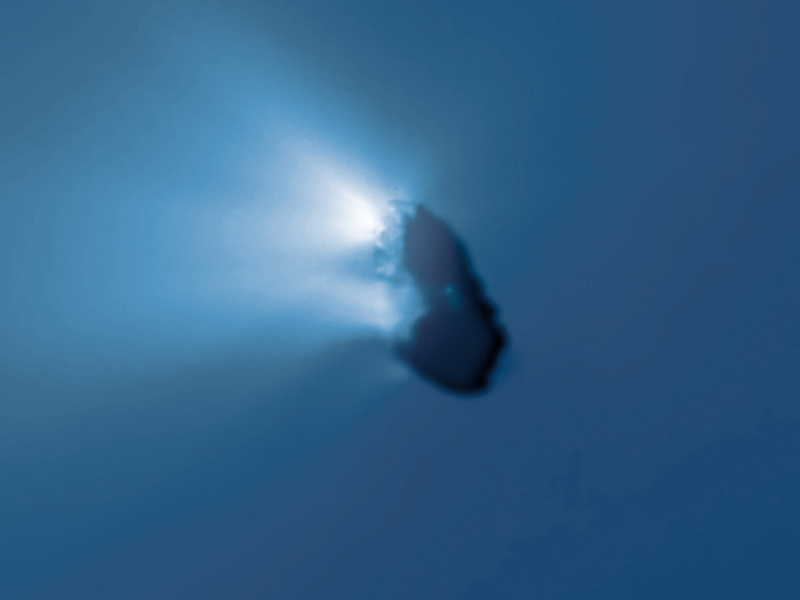 The nucleus of Halley's Comet, as photographed by ESO's Giotto mission [StarDate]

About every 75 years a very special member of the Solar System comes close to the Sun. There is much excitement as it appears in our skies, for it's Halley’s Comet, the most famous comet of all.

What's so special about this comet, and how did it get its name?

Many comets surprise us when they appear in our skies. But there are others that we expect, because we can tell when they're coming. Halley's Comet was the first of this kind. The first person to realize it was an English astronomer, Edmond Halley (1656–1742). Halley was a friend of another great English scientist, Isaac Newton (1642-1727), the man who first worked out the laws of gravity.

Halley used Newton's laws of gravity to calculate the orbits of a number of comets. One of them was a comet that Halley had seen from London in 1682. When he did his calculations, he realized that this comet had a similar orbit to comets observed in 1607 and 1531. Were these all the same comet orbiting the Sun every 75 or 76 years? Halley thought so, and boldly predicted that it would return in 1758.

Many people were not convinced that the comet would come back in 1758, but others were looking out for it. The year was almost over with no sign of the comet. Then, dramatically, it was spotted on Christmas night. Halley didn't live to see his prediction come true, but the comet was named in his honor. Since then his comet has come back three times, in 1835, 1910 and 1986.

What about the past? There are records of the comet's visits going as far back as 240 BC, when it was seen by the Chinese. One famous return was in 1066 before the Battle of Hastings. The comet was shown on the Bayeux Tapestry. Some people said the comet was a bad omen for King Harold of England, who was then defeated by French invaders. But I guess that also made it a good omen for the French!

When the comet returned in 1910, astronomers expected the Earth would pass through the comet's tail. Some people thought that there would be poisonous gases from the tail and were ready to buy "comet pills" and other fake remedies from con men. However no effects were noticed at all.

For the comet's 1986 return, the European Space Agency sent a probe called Giotto to photograph it up close. This was the first time that anyone had seen a comet’s nucleus. They are too small to see from Earth even through large telescopes.

Halley's Comet is the first known periodic comet. A periodic comet is one that is known to return in 200 years or less. Although comets are usually named for their discoverers, this comet was named for Halley because he worked out its orbit.

Halley’s Comet is now headed away from the Sun out beyond the planet Neptune. It will be back again 2061. How old will you be then?