Diagram for PS2 to Cable Hookup

Are you preparing to hook your PS2 up to your cable modem? Here's a diagram to help you figure out where everything plugs in.

First off, you need several things. FIRST you need a cable modem which you probably got from your cable company. SECOND you need a wireless router, which is the thing that splits up your cable modem signal between your PC and your PS2 so both can be online. Learn about the Linksys Wireless Router

Here is the diagram: 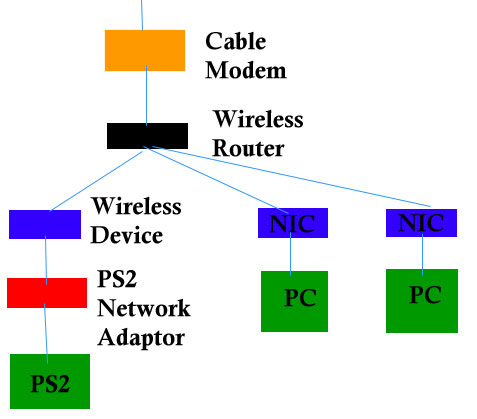 Your cable connection should be able to EASILY support the PS2 playing games while your computers are doing things as well. We've had all 4 PCs in the house playing online games while the PS2 played something and it went with no problem. If you have cable bottlenecks, check out your cable plan and make sure you are on a plan that supports fast speed! Cable is NOT all the same speed. There are definitely "fast" and "slow" cable plans and if you want the faster plan, you usually have to pay for it!

Getting PS2 Online - Step by Step
Connecting your PS2 to the Internet
What do you Need to put a PS2 Online?
Review of the PS2 Network Adapter
PS2 Wireless Internet Connector - Linksys
PS2 and Wireless Connector Speed

You Should Also Read:
Getting PS2 Online - Step by Step