The African Queen is a movie released in 1951 based on the book of the same title by C.S. Forrester written in 1935. Originally, set to be filmed entirely in Uganda, The African Queen was filmed in the Belgium Congo (modern day Democratic Republic of the Congo) with the school scenes filmed in Uganda, and green screen work done in London. Filming on location was something film makers rarely did mid-century, never mind film in Africa. 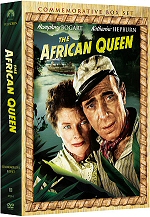 The African Queen stars Humphrey Bogart (Charlie Allnut) and Katharine Hepburn (Rose Sayer). The movie begins with a scene in an African village where Rose and her brother Samuel (Robert Morley) who are missionaries leading a church service in a hymn. The villagers are trying to sing the hymn and not doing a good job of it. Cut to Charlie Allnut who is chugging up the river on the African Queen and speaking Swahili to some locals. Charlie has arrived with the mail and news about a war between the Germans and everyone else. After Charlie leaves to go to another village, we see the Germans raiding the village and burning huts. Samuel ends up in a squirmish with a few of the Germans, he is hit with the butt of a rifle and later dies of his injuries.

When Charlie arrives back at Rose's burnt down village, he learns Samuel had died. Charlie tells Rose to pack her things and proceeds to bury Samuel.

Once on the African Queen, Rose comes up with an idea to blow up the German gunboat, The Lousia, that patrols a large lake. First they must navigate the river to get to the lake. At the beginning of their trek, Rose shows complete disdain for Charlie and his drunken ways. At some point during the dangerous river ride, Rose and Charlie fall in love.

There are scenes of hippos, baboons, and crocodiles through out the film and at times the action has been obviously green screened. This is to be expected considering the date of this movie. The wildlife scenes are not as gratuitous as they are in The Snows of Kilimanjaro. I found myself laughing out loud at this movie and I definitely recommend it as a vintage romantic comedy. If you want to see anything that would give you some insight to some African culture, you will get that in the first 15 minutes of the movie and then the rest is simply two people in a boat on a river. 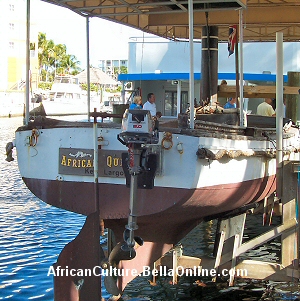 You can view the African Queen boat in Key Largo, Florida. The boat is located behind the Hilton Hotel at U.S. Highway 1 at mile marker 100.

is available from Amazon.com in DVD, Blu-Ray, and Instant Rental formats.

This copy of The African Queen was rented by me with my own funds.