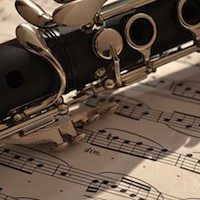 Did you know you can listen to the original recording of the Rhapsody? It’s the perfect soundtrack to this article, so scroll to the link before reading on.

In 1958, the composer Leonard Bernstein began hosting an educational television series titled “Young People’s Concerts.” Using orchestral pieces to explore musical topics, he answered questions such as “What is classical music?” and “What is American music?” Rhapsody in Blue is an example of one, but not the other.

George Gershwin took up the piano at age 10, but he received little formal training. Like many a young man later in history, he soon started writing pop songs – because he excelled at that too. His first teacher, quoted in many books, wrote in a letter: “He wants to go in for this modern stuff, jazz and whatnot. But I’m not going to let him for a while. I’ll see that he gets a firm foundation in the standard music first.” And so he tried.

A classical composer, as Bernstein explains, “puts down the exact notes that he wants, the exact instruments or voices that he wants to play or sing those notes – even the exact number of instruments or voices.” Symphony, sonata, concerto: these are intricate forms perfected over hundreds of years, like the sonnet or the villanelle in poetry – this many lines, that many syllables. For a musician, riffing was not the point. The point was to stick to the score, showing you had the skills to follow the maestro’s directions.

Then, like all arts, music modernized. Out with the rules; in with innovation! “Jazz and whatnot” – contemporary genres – began to interest classically trained musicians. A generation earlier, Antonín Dvořák had advised Americans to stop imitating Europeans and find their own sound. Trouble was, they didn’t know where to look … until Paul Whiteman came along.

By then Gershwin was working on Broadway with lyricist brother Ira. One late January night in 1924, the brothers were shooting pool with a friend when Ira read a news article asking, “What is American music?” George, the article claimed, was “at work on a jazz concerto” set to premiere at a Whiteman event on February 12. This was news to the three – they were working on a musical comedy! Whiteman had to remind George that he had previously accepted the commission, and he wouldn’t let George back out.

Whiteman led an orchestra that incorporated contemporary styles into their concert repertoire. No less than Duke Ellington, in his 1976 autobiography, praised the bandleader for being a “genuine enthusiast” of jazz who, “despite his classical background, didn’t have a snooty bone in his body.” Whiteman promoted jazz as a modern art form and unique American sound. It was for this cause that he forced Gershwin to write Rhapsody in Blue.

The bandleader believed that Gershwin, writer of popular show tunes, had the chops to write a jazz-inflected classical piece. Think of Shakespeare, writer of popular shows, with his gift for poetry. What craftsman wouldn’t aspire to the highest form of his art? As for jazz, remember when rock ‘n’ roll was just noise? Popular art always has to prove itself to the establishment. Yet Jelly Roll Morton, Louis Armstrong – these were serious musicians. Jazz was as intricate as the most composed of symphonic music, and Whiteman would prove it. This is why he was holding his concert at Aeolian Hall, a classical venue. It was An Experiment in Modern Music.

However, a concerto has three movements, with parts for a soloist and the whole orchestra – it’s not a composition one throws together in five weeks. Instead, Gershwin wrote a rhapsody, whose single free-form movement is less exacting. (How does the Queen song fit that category? A rhapsody also happens to be dramatic, with frequent changes in mood. “Mamma mia, mamma mia, mamma mia, let me go!”) Gershwin found inspiration in the rhythm of a train journey to Boston, where his musical was touring. As the Rhapsody took shape, he added contrasting sections and other improvements, including that playful clarinet glissando.

The orchestra received the finished score, arranged by Ferde Grofé, with only days to spare. Gershwin left a blank space to indicate where he would insert a piano solo, which he wrote only after the performance. How would they know when to take up the music at the end of it? Whiteman was to watch for a nod from Gershwin. That’s the way they roll in jazz.

By 3 p.m., Aeolian Hall was packed. Celebrities such as Rachmaninoff and Stravinsky were in the audience, and for two and a half hours they listened to two dozen pieces designed to educate the elite on the art of jazzing. It made for a long afternoon. The experiment was a massive success, but really it’s remembered for the second-last piece in the program. According to The New York Times, “tumultuous applause” followed Rhapsody in Blue.

To be clear, it ain’t jazz. Sure, it features blue notes and syncopation, but what’s to be played is written, not improvised. So why is it not classical music either? Bernstein himself deemed it “not a composition at all.” Unlike a classical work, he wrote, “you can remove any of these stuck-together sections and the piece still goes on as bravely as before. It can be a five-minute piece or a six-minute piece or a twelve-minute piece.” Indeed, in a United Airlines commercial, it’s a one-minute piece. “And still it’s the Rhapsody in Blue,” Bernstein observed. He loved the piece anyway, and his extended 1959 interpretation – itself often criticized – is a popular version.

The original recording, due to the technology at the time, is an abridged version. By 1927, it had sold a million copies. It’s possibly the most lovable segment in Fantasia 2000; and in 2008 jazz master Herbie Hancock and classical virtuoso Lang Lang had fun with it at the Grammy Awards, sharing Gershwin’s solos. Rhapsody in Blue has catchy melodies and an irresistible exuberance. Its American spirit is in its ambition, its whirlwind creation, and that blank space where Gershwin made things up as he went along. So, really, who cares what genre it belongs to? It’s just a good thing he wrote it.