Steven Casey Murray
Fright Night 2011 is yet another re-make of an eighties classic of the same name. Though it takes a very different approach in how it deals with the plot of the movie, by making it much darker and more serious. It loses out though, because it was the tongue in cheek comedy which made the original the classic it is. If we do have to witness another re-make, at least this one isn’t completely terrible though. 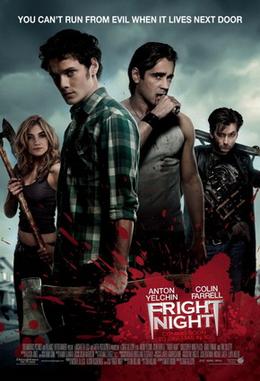 Once again, a vaguely nerdy teenager named Charlie (Anton Yelchin) thinks his mysterious and seductive new next-door neighbor, Jerry (Colin Farrell), is a vampire. No one else believes him except for his old childhood pal, Ed (Christopher Mintz-Plasse.) Who he’s trying to escape, while he moves up the social circles in his high school.

So as the bodies continue to pile up and Charlie continues to investigate, Jerry continues to charm everyone around him. That includes Charlie’s ultra popular new girlfriend Amy (Imogen Poots.)

One of the major ways in which this "Fright Night" has been updated is the actors have all become seriously better looking, except for Evil Ed, of course.

The setting is strong and makes the premise believable. Director Craig Gillespie's version, based on Marti Noxon's script, takes place in the overly developed suburban sprawl outside Las Vegas, where people come and go and those who do live there often sleep all day and work all night. The barren wasteland of abandoned houses — if they were ever inhabited in the first place — is the perfect place for a bloodsucker to lay low.

Farrell really makes Jerry the vampire believable and is probably the only character which out does the original. He plays the seductive, sexy Jerry very well, both charming when he needs to be and a crazed lunatic who enjoys killing the next. The other strong character here is Yelchin who shows his strong acting abilities again. He’s not as likeable as the original Charlie, who was obsessed with horror, but he’s good all the same, and he and Farrell work well together.

One thing which is nice to see and which the script plays on is that Jerry is a vampire, you know those creatures who aren’t self loathing or romantic – but actual evil, murdering, sadistic killers of the night? This makes for a few good jokes made at ‘Twilight’s expense. The odd thing is it seems odd to see an actual evil vampire now, and yet very, very refreshing.

The strong supporting cast are ultimately a fail. Toni Collette as Yelchin's skeptical single mom makes no impression and neither does girlfriend Imogen Poots. In fact the female characters are very weak – and the original, needy, slightly confrontational Amy Peterson (Amanda Bearse), was leaps and bounds better than Poots' pretty vacant face and character. The ultimate fails come in two of the largest characters though. Evil Ed played by the forgettable Plasse, who can’t even scratch the surface of what Stephen Geoffreys brought to the original – which is still a stand out performance in horror to this day.

David Tennant is awful as a supposed master of the supernatural. Roddy McDowell played the Peter Vincent role in the original much better and with way more laughs; it's expanded here with Tennant playing the character as a flamboyant but self-loathing fraud who actually takes the situation all too real. His version on the character is flat, except for his over the top wardrobe, and I felt like I needed a laughter machine to tell me when, or if, he was making any jokes. The original played a lot on these two characters and succeeded – the re-make fails dismally with them both.

The film, due to it being filmed in 3D and nearly the entire thing being filmed in the night (vampires ya know), is too dark and made some scenes difficult to make out. The 3D bandwagon is getting nearly as bad as the re-makes, and this film could’ve definitely succeeded in 2D.

Despite its flaws and the fact it’s a re-make, the film is good for a one off watch. Not really a cult classic in the making like its predecessor, but lots of action and Farrell rules in his role of Jerry the vampire. Worth a watch.

You Should Also Read:
THE CABIN IN THE WOODS REVIEW
VAMPIRES IN FILM
TWILIGHT