I went to see this film quite by chance. I’d seen the first two films, thinking the first one was good and quite scary, and that the second was a poor imitation of the first. I had missed the third one altogether. My friend really wanted to see the new one though, and filled me in on some of the details I’d missed. What I wasn’t expecting was a really good thriller horror, better than both the first films combined – and also a film that really creeped me out. 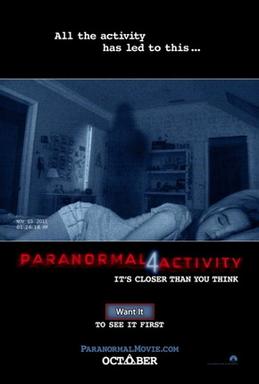 The film may not answer the mythology, but then when can these found footage films ever fully answer the questions raised? What it does do is create a lot of scares, a lot of creepiness, a lot of jumps and some really creepy scenes. It also annoyingly raises a lot more questions about the serious, but that can't be helped.

Five years after Katie ruthlessly killed her boyfriend, sister, and brother-in-law as well as kidnapped her nephew, the demon-possessed woman has stopped running from the law and settled in suburban, Henderson, NV. However, despite headlining the cast, Katie is little more than a supporting character and the story once again centres on a clueless victim, Alex (Kathryn Newton), who attempts to make sense of spooky incidents in her home. Alex is a typical teenage girl, Skyping with her boyfriend Ben (Matt Shively) and playing table tennis on Xbox 360 Kinect – ignorant to the fact her new neighbours are a demon-possessed murderer and a troubled child. As the unexplained and dangerous happenings escalate, Alex comes face to face with the horrors of Paranormal Activity.

Alex is such a welcome change from the boring recordings seen in the previous films and lots of giggles are found between the genuinely superb young actress Kathryn Newton and her on screen best-friend/love interest Matt Shively. The change of teenage from adult also opens up a lot more curiosity from the teens, which is believable, and a lot more believable questioning and question asking. I would say more happens in this film than the whole of the first two put together and it’s a lot more creepy and skilfully directed to creep the audience out with odd goings on.

Kathryn Newton is, as I say, a fantastic young actress and handles all of her scenes much better than her adults. Wanting to leave the house, questioning things constantly etc. and all with believability, she makes Alex a very likable heroine who the audience can get behind and route for.
Matt Shively as her best friend delivers lots of laughs and also lots of help as Alex investigates deeper and deeper. Also a good actor, he comes across just as genuine and likable.

(Alex levitates by an unknown ghostly force in the night)

This is a really good horror film, and though it doesn't deliver a huge storyline – if you use your mind, you understand what's going on by the end. This is by far my favorite Paranormal Activity film and the scariest, when the credits rolled the cinema was in silence as if recovering from a shock – something I've rarely remembered witnessing.

Watch it for great scares and great performances. Highly recommended!