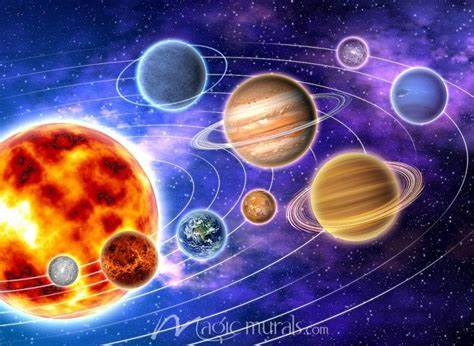 The Solar System is a star system named after our star, the Sun. Sol is Latin for Sun.

The Sun rules
Our star was made nearly five billion years ago after a giant cloud of gas and dust collapsed. Almost all of the material of the Solar System is in the Sun. It has 99.8% of the total mass, leaving only 0.2% for everything else. Since the force of gravity depends on mass, the Sun's gravity rules the Solar System.

Using the leftovers
Some of the leftover material from the giant cloud made planets. There are eight, and all of them are big enough to be fairly spherical (like basketballs). Five dwarf planets are similar to planets but share their orbits with lots of smaller bodies. Planets and dwarf planets may have moons orbiting them. Moons can be any shape.

Inner Solar System
The inner Solar System has four planets: Mercury, Venus, Earth and Mars. They're all small rocky bodies and Earth is the biggest. The four planets only have a total of three moons – our Moon and the two Martian moons, Deimos and Phobos.

Between Mars and Jupiter is the asteroid belt. It's a region of leftover rocks, some of them very small. Ceres, the largest one, is a dwarf planet, and it's much smaller than our Moon. When the Solar System was forming, Jupiter's gravity disturbed material in the asteroid belt so that it couldn't come together to make a planet.

The habitable zone of a star is the area around it where water could be liquid on the surface. This is where we might expect to find life. Of course, Earth is in the Sun's habitable zone, but so is Mars. Unfortunately, Mars is smaller and colder than Earth and it has a very thin atmosphere. Although Mars doesn't have liquid water on the surface, it did in the past.

The inner part of the Solar System is a tiny bit of the whole thing. Yet the distances are still huge. Earth is 150 million km (93 million miles) from the Sun, and the asteroid belt is two to four times as far away. So it's helpful to use astronomical units (AU) for Solar System distances – 1 AU is the distance from the Earth to the Sun.

Outer Solar System: planets and moons
The outer planets are giant planets. Jupiter is by far the most massive. It has two and a half times the mass of all the other planets put together. It’s also very big. You could fit over seven hundred Earths into a Saturn-sized hollow, but nearly twice that number would fit inside a hollow Jupiter. Jupiter and Saturn are made mostly of hydrogen and helium and are known as gas giants. They don't have a solid surface.

Uranus and Neptune are sometimes called ice giants. They contain lots of hydrogen, but are mostly frozen water, ammonia and methane. The ice giants are much smaller than Jupiter and Saturn, but they're still big – sixty Earths would fit inside each of them.

Saturn has the most beautiful ring system, but all the giants have rings. They also have large numbers of moons. In April 2020 we knew of 79 moons for Jupiter, 82 for Saturn, 27 for Uranus and 14 for Neptune. Two of these moons, Jupiter’s Ganymede and Saturn’s Titan, are bigger than the planet Mercury.

Outer Solar System: Kuiper Belt and scattered disk
Neptune is 30 AU from the Sun. Remember that's thirty times farther from the Sun than we are. From there the Sun would just look like a bright star. Once you get past Neptune, the Kuiper Belt starts. It's a bit like the asteroid belt, but much bigger. It stretches from 30 AU to 50 AU, ten times wider than the asteroid belt. And although asteroids are rocky leftovers from the early days of the Solar System, Kuiper Belt objects are icy leftovers.

Pluto and its moons are Kuiper Belt objects and so are two other dwarf planets. They're called Makemake (MAH-kay-MAH-kay) and Haumea (how-MAY-ah), named after Polynesian gods.

If we keep going further the Kuiper Belt, we enter the scattered disk. The dwarf planet Eris was discovered there. At first, astronomers thought it was bigger than Pluto. Now it seems that Pluto is a tiny bit bigger, but Eris is more massive.

Oort Cloud
Astronomers think there is a sphere of icy bodes surrounding the Solar System at tens of thousands of AU. The Sun’s gravity is weak there and other stars can affect these comet-like objects. Sometimes they kick them into orbits that go into the inner Solar System. Although some comets come from the Kuiper Belt or scattered disk, the Oort Cloud is probably where most of them come from.

The outer edge of the Oort Cloud is the final border for the Solar System, because the gravity of other stars competes with the Sun's gravity there.