Allyson Elizabeth D´Angelo
This recipe for Curried Potato Pancakes with Scallions & Chives Recipe is my own personal take from a Jewish traditional pancake the latke, which I love enormously. Potato Latkes are very simple and delicious to make using shredded potatoes and eggs as the main ingredients and shallow pan-fried on both sides until golden brown.

My Jewish friends often eat these with sour cream or apple sauce and my version pairs well with either of these toppings. The basis for these type of pancakes with shredded potatoes can be turned into anything you choose to put into them for extra flavor - just experiment. However, the squeezing of the shredded potatoes is key here.

Preheat the oven to 250 degrees F.

1. First, fill a bowl with cold water and then grate the potatoes on the course side of the grater. Add the shredded potatoes to the water bowl, this will prevent them from turning brown. After you add the last shredded batch to the water leave them in the bowl for at least 2 minutes.

2. Next, beat the eggs well in a small bowl and add the yellow onion, garam masala, turmeric (if using,) green onions, chives, salt and pepper. Stir well to combine and set aside.

3. Now for the messy part. Drain the potatoes in a colander. When most of the water has drained away, spread the shredded potatoes on layers of paper towels or a linen tea towel (cloth) and roll them up, twisting and squeezing out as much water as you possible can. Repeat if necessary. Add the potatoes to the spice mixture and mix well to combine all of the ingredients.

4. In a deep-sided skillet, heat the oil on medium to high heat until hot but not smoking. If you over step this part and the oil is smoking, then just remove the pan from the heat and let it cool down a little. Then, cooking in batches, return the pan to the heat and add big spoons of the potato mixture, spreading them out with a fork a little to make them into round shapes. You can make these large or small, it is totally up to you but only cook 3 if small or 2 if on the larger side. Don't crowd the pan or they won't brown nicely, they will steam!

Cook for approximately 4 -5 minutes until they are golden brown on the bottom. Flip them over and continue to cook for another 4 minutes approximately until golden on the other side. Keep the pancakes warm on a pan in the oven while you cook the remaining batches.

Serve with sour cream or apple sauce as a topping along with a garnish of chives or scallions if you wish.

You Should Also Read:
Visit my Home Cooking Site for more delicious recipes! 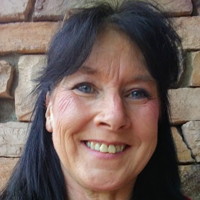