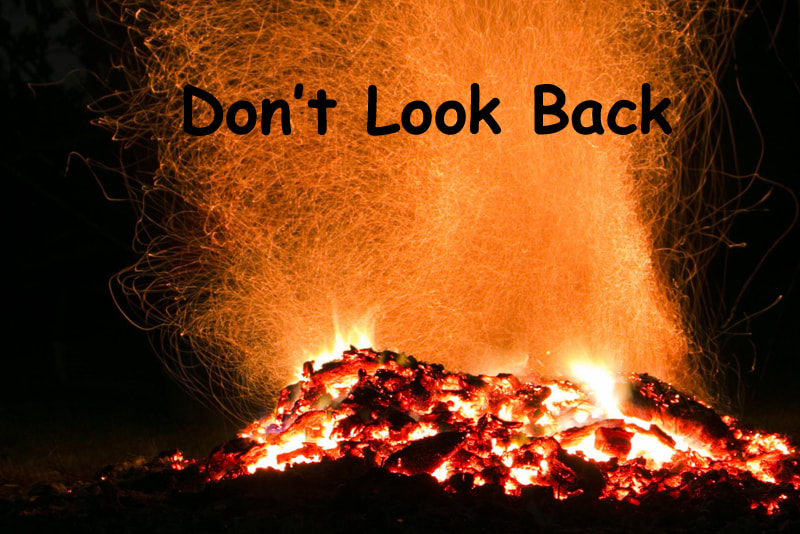 Genesis 19:24-26
"the Lord rained down burning sulfur on Sodom and Gomorrah But Lot's wife looked back and she became a pillar of salt."

This woman's 15 minutes of fame came from one dreadful moment. She hesitated, chose to ignore words of wisdom, looked back, and met with disaster. Lets get into the Bible a bit for an idea of what happened to her.

The people of Sodom and Gomorrah were well known as wicked, sinful people. Abraham's nephew, Lot, chose to move his family into the region near the cities because the land was green and well watered. There would be plenty of room to accommodate his flocks and herds.

However, we read that soon Lot was living inside the city gates and he seemed to be well known and influential. Lot and his wife probably thought that they could take advantage of the benefits of the comfortable life in Sodom and still avoid its evil. But living close to sin will silently take its toll. What at one time offends us, will eventually seem common place and even acceptable.

God decided to destroy Sodom and Gomorrah because of its wickedness. He sent angels to rescue Lot and his family. When Lot heard, he went to the two young men who were engaged to his daughters to tell them to flee with him. Lot should have been the family authority but had evidently lost his moral standing, because they refused to go. At dawn Lot, his wife and daughters were hesitating, so the angels finally had to take them by the hand and lead them out of the doomed city.

The angels ordered them to run for their lives and to not look back. The two cities and all the surrounding vegetation were being destroyed. As she ran, Lot's wife must have been thinking about everything she had left behind in the city. She hesitated. She stopped running and turned to take one last look at the life she had lived. In that instant, she was turned into a pillar of salt. It makes me think of the heat of a volcanic eruption and what might happen to anyone standing too close.

Sin can be very attractive. It is only when the Lord Jesus Christ enters our lives and rescues us that we see it for the evil it is. After that moment we must keep our eyes on Him, flee from sin and never look back.


The ruins of Sodom and Gomorrah have been discovered southeast of the Dead Sea just east of Jerusalem. Archeologists say that the debris was about three feet thick and there was evidence that the fire started at the top of the buildings and burned down.

Contemporary living with biblical wisdom.
Women of the Bible devotional

You Should Also Read:
Women of the Bible - Miriam
The Story of Rahab -or How to Change a Life
Mary Magdalene