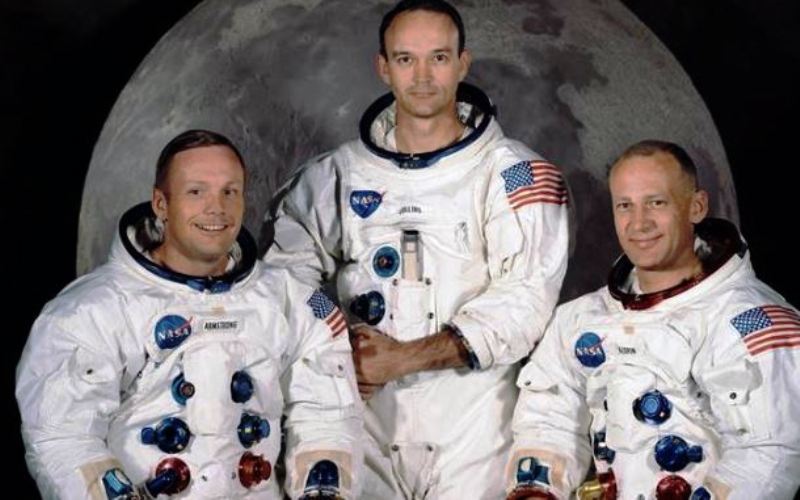 On July 20, 1969 five hundred million people watched two men step onto a familiar, yet alien, world. Everybody knows the first was Neil Armstrong and many know that it was Buzz Aldrin who followed.

A third man stayed in orbit so that they could get home again. I have heard him described as "relegated to the status of a quiz question" and indeed I recently attended a quiz evening where one question was the name of the Apollo 11 astronaut who didn't walk on the Moon. Not many teams knew that the answer was Michael Collins. He has written his own account of being an astronaut, Carrying the Fire, and it's a superb read. It was originally published in 1974, and I read the 40th anniversary edition.

Collins manages to convey the sense of the repetition and technical detail needed to prepare for space missions without making the book itself tedious. When needed, he highlights technical information, giving clear and direct explanations. And when he got to the actual space missions, I was riveted, even though I knew the outcome. Great storytelling.

There are touches of humor, including self-deprecating humor, to enliven the book. Yet it isn't a sign of frivolity, for Collins pursued his dream of becoming a test pilot, and then an astronaut, with thoroughness and determination.

One aspect of being an astronaut which Collins detested was the constant press and public scrutiny of his private life and his family. He refers to the press's "morbid. . . pre-occupation with the frills," comparing it to the idea of "describing what Christiaan Barnard wore while performing his first heart transplant." He points out that test pilots are trained to "the cold, dispassionate analysis of complicated facts. We weren't trained to emote."

Nonetheless when the test pilot gets into space, he's far from dispassionate. "My God, the stars are everywhere: above me on all sides, even below me somewhat. This is no simulation, this is the best view of the universe that a human has ever had. We are gliding across the world in total silence, with absolute smoothness; a motion of stateless grace."

Those used to modern public soul-baring will find this a discreet read. Michael Collins is a private person and I think he was generous in what he shared of himself with his readers without trespassing on the privacy of others.

Nonetheless I felt Carrying the Fire was a love story. No, make that a love triangle. His love of flying and his great desire to go into space made life difficult for his wife, and he knew that. The long hours of training are hard on astronauts' families and the missions are tense.

When Apollo 11 came home Collins felt he had cheated death often enough for twenty lifetimes and that it was time to look out for and enjoy his family. His deep affection for his wife isn't overdone in the book, but it is evident. Unusually, they are still married. [Update: As of July 2019, Michael Collins was still alive, but sadly, his wife Pat died in 2014.]

As Collins orbited the Moon, he says he wasn't lonely. However there was anxiety about his colleagues. The earthbound could watch the landing on television, but he couldn't. Worse yet, he was on the far side of the Moon and out of radio contact. He confesses the "secret terror" that had haunted him for months. What if the landing failed or they couldn't make it back into orbit? He knew he would try to get home, but as he waits, he thinks "I will be a marked man for life and I know it."

The fact that Michael Collins and I wouldn't agree on everything isn't a criticism of this fascinating book, but I did wonder for how long his strong defense of NASA's refusal to fly women astronauts persisted.

It was understandable that he found it quite embarrassing enough to have to carry out bodily functions in a Gemini craft with another man present. Presumably, his own background wouldn't take him to an obvious solution: single-sex crews. Women can fly too. And women can survive in space – cosmonaut Valentina Tereshkova spent nearly 71 hours in orbit. When she made her flight the combined time in orbit of all the Mercury astronauts was less than 54 hours.

I'll end by quoting a point still worth considering: "We cannot launch our planetary probes from a springboard of poverty, discrimination, or unrest; but neither can we wait until each and every terrestrial problem has been solved."

NOTE: I bought my copy of Carrying the Fire with my own funds.

You Should Also Read:
The Moon - Earth's Daughter
Exploring the Apollo Landing Sites
In the Shadow of the Moon - film review