Speak to members of The Church of Jesus Christ of Latter-day Saints (the Mormons) and they often will tell you prejudice remains "alive and well" in the 21st century. Even after many years since the restoration of the Church, Mormonism is still misunderstood. In fact, during Mitt Romney's presidential run, many in the media seemed to have a "hey day" poking fun at the church.

Whether it is from claims that Mormons "aren't Christians" to many of the other myths that float in people's minds or the media, most Mormons have heard them all. When will the divide be bridged and increased understanding come? 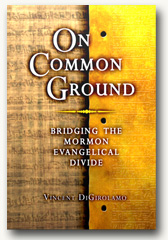 Author Vincent DiGirolamo's book, On Common Ground: Bridging the Mormon Evangelical Divide, is a beautiful effort along this idea. According to DiGirolamo, there are similarities between the two camps that would surprise the most staunch of believers on either side of the divide.

The author grew up in a Catholic home, became a born-again Christian, and converted to the Mormon church. It is this precise perspective that has deepened his awareness of the many sides of the purported "differences." Taking a principled approach, DiGirolamo determined to put into print what he found. On Common Ground: Bridging the Mormon Evangelical Divide is the result of his research and his personal experience.

The book itself is beautiful. The cover, with its ancient parchment colors, is vivid and eye-catching. But what truly matters is that which is inside. As the author states early on in the book, On Common Ground can be used as a concordance (or topical guide) to understand Biblical topics. But even beyond this, thumb through the book and you will quickly capture just what the author purports . . . there is much of similarity between Evangelical Christian faith and the faith of Mormons.

Not only is On Common Ground an encyclopedic source of topic after scriptural topic (listed in order much like a dictionary), but it is also an excellent reminder of similarities between these two groups of people who love the Lord. Those who look to Christ for redemption have much in common - even to the surprise of those within these two camps of Mormonism and Evangelical Christianity.

The author has accumulated more than four thousand common principles of faith. I was amazed as I thumbed through the 300+ pages of this book. DiGirolamo has worked on this project for more than 25 years. Truly, On Common Ground: Bridging the Mormon Evangelical Divide is a valuable and welcome addition to my bookshelf at home.


~~~~~
Struggling with your teens? C.S. Bezas book has been called the perfect aid for parents and youth leaders. Powerful Tips for Powerful Teachers: Helping Youth Find Their Spiritual Wings is available in most LDS bookstores and online at DeseretBook.com. Order it today and watch miracles happen.

Hangout for Latter-day Saints and other friendly souls!

Spoken Of, Throughout the Whole World

The Power of the Sacrament

To Speak with the Tongue of Angels

The Small and Simple Things You Choose to Do

Jesus Christ and the Plan of Salvation