Mary Somerville and the World of Science – book 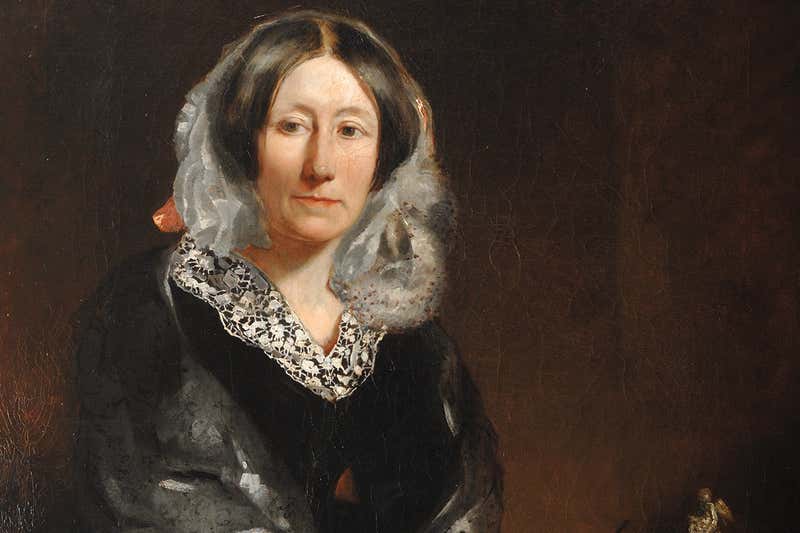 Allan Chapman's Mary Somerville and the World of Science is not a biography. The book is only 92 pages long – that's a page for every year of Mary Somerville's eventful life. It's an extended essay on her accomplishments as part of the scientific world of her time, and it's an interesting one. Dr Chapman is a very knowledgeable Oxford historian who knows a good deal about the history of astronomy and its social context.

Mary Somerville (1780-1872) was not only an exceptional woman for her time, but an exceptional individual for any time. Although as a woman she was barred from higher education and from membership in scientific societies, she was nonetheless a major figure in nineteenth century European intellectual circles.

Educating Mary
She was born Mary Fairfax in Jedburgh, Scotland, and her family's idea of education for girls was needlework and drawing, not mathematics. In fact, Mary excelled at needlework and was an accomplished artist, but mathematics she learned by listening in on her brother's lessons, and from books. Her flair and love for mathematics led her later into the physical sciences.

Mary's self-education was retarded by her first marriage, as her husband was dismissive of education for women. However it was resumed after his death, and then greatly encouraged by her second husband Dr. William Somerville.

The Mechanism of the Heavens
In 1831 Mary Somerville's first book was published, a translation and exposition of Laplace's masterwork Mécanique Céleste. It's a highly mathematical discussion of the movements of bodies in the Solar System.

The Mechanism of the Heavens was well received by the scientific community. It enhanced Mary's reputation, but Chapman makes it clear that Mary Somerville was already well known. For example, the Somervilles made their first trip abroad even before this book was written, and they were received by François Arago, celebrated mathematician, physicist, astronomer, and – years later – prime minister of France. Arago, whom they had met in London, introduced them to other prominent scientists, including Laplace.

Two traditions
But how do you get a scientific reputation without publishing? To understand this we need to look at the British approach to science.

In France, science was professional and official. Universities provided the training, and there were also national academies in which government provided funding for research, but could specify the kind of research to be done.

By contrast, in Britain the tradition was that of the Grand Amateur. This was not amateur in the sense of second-rate. It referred to an activity done for the love of it, not for money. Scientific papers were acceptable on their merits, not based on the formal qualifications of their authors. Most of the scientific research was carried out by gentlemen of private means. Scientific societies such as the Royal Society were privately funded, and members studied what interested them.

Making a scientific reputation
In Britain, publishing books and articles wasn't the only way of sharing and developing scientific ideas. Others were:


Although Mary couldn't join a society, a paper she wrote was presented to the Royal Society by her husband. The Somervilles were very sociable, often getting together with their friends for meals and conversation. And their friends were the scientists and artists of Edinburgh and London. Mary also carried on an extensive correspondence. In fact, she was fifty when her first book appeared and ninety when the last one was. Two of the books went to several editions, and Physical Geography was used in universities and schools for over half a century.

What if she'd lived two centuries later?
What might Mary Somerville have achieved had she been born into a world of greater opportunity for women? Allan Chapman addresses this question, but essentially considers it irrelevant to the person she was. And that person was not only an influential figure in her field, but in her lifetime saw positive social change that she had supported, such as the abolition of slavery and greater opportunities for women.

The good
Chapman is an excellent and thoughtful writer. The subject matter is fascinating and I enjoyed the vicarious association with a who's who of nineteenth century science. The namedropping could take up a page on its own, so I'll limit myself to mentioning that the Somervilles were good friends with John Herschel and his wife. John Herschel was a noted astronomer, but also a brilliant mathematician. He read all of Mary's manuscripts and found little that needed amendment or correction.

I would love to have known Mary Somerville. Besides being supremely talented and exceptionally focused, she was also sociable and charming. The next book on my reading list is her autobiography.

The not-so-good
I liked everything about the book except the price – £35.99 (about $57) for soft cover or ebook. Don't they want people to read it?