April is Autism Awareness Month. To raise both money and awareness of the spectrum of disorders that are termed “autistic”, Autism Speaks is sponsoring “Walk Now for Autism” all across the country.

This is a charity walk that speaks directly to me. My 16 year old son, Michael, has Asperger’s Syndrome, a form of high-functioning autism.

Unlike many other charity walks, the autism walks are geared completely for the family. There is an information fair held at the same time that kids can play games at, get prizes, and be with others just like them. This walk is informal – there’s no “winner”, this is about awareness. Parents are encouraged to walk with their child that is on the spectrum. If your child needs to stop and sit for a few minutes, that’s fine. If your child becomes overwhelmed by the experience, that’s OK, too. This is a day for them.

On the other side, you don’t have to know someone with autism to participate and help make a difference.

Claire and her 19 year old son, Blake, participated in Georgia’s walk last year. When I asked her what the best thing about the walk was, she replied, “It was just very neat to see that many people in the community come together, whether they are affected by autism or not.” She estimated that there were around 18,000 people at the walk, with teams ranging from “Team Jonah” that walks for their 7 year old son Jonah; all the way up to corporations like UPS, Delta airlines, and B98.5 FM. 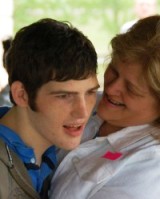 Despite severe limitations; such as being non-verbal and needing constant 2 on 1 supervision to prevent him from harming himself, Blake was able to walk rather than use a wheelchair last year. “He likes when people recognize him”, his Mom said, and there were volunteers there from The Marcus Institute (which Blake attends) and other kids from our local support group Spectrum which Claire has been involved with for about 10 years. It is a major accomplishment for kids on the autism spectrum to be around that many people, but Claire said the energy was great and there was plenty of space for him to spread out. It made her very proud of him.

Melissa and her husband, Scott also walked last year and have a child on the other end of the spectrum. Her 12 year old daughter, Courtney, has Asperger’s Syndrome like my own son. While Courtney does not have some of the physical and communication difficulties that Blake has, the walk provided its own challenge for the family.

For Courtney, and many other kids on the spectrum, big crowds and lots of noise can be overwhelming. So Courtney’s parents, Melissa and Scott decided to start that walk from their house. The walk officially began at 8:30 AM, so that’s what time they pulled out of the driveway. That way they got to the start line a little behind the large group of people that start out all at once, and Courtney was not so conscious of the crowd. The walk is very accommodating for these kids, with no stringent rules. It is all about getting these families to participate.

I asked her parents why they walked. Melissa said, “It was something that the 3 of us could do together. It’s important that Courtney sees us support Autism as a family.” Scott said it gave him an incredible sense of solidarity, being there with so many other families that know exactly what we all are going through every day.

I asked Courtney what she thought. “It was fun! …The fact that I actually got to walk and all the different people and things.” She wants to get some Heelies for her next time walking.

If you live in Georgia, please come out and join us on April 12th. If you don’t live here, don’t worry – there’s a walk near you, too! Check out Walk Now for Autism’s website to find a walk in your state. There are even walks scheduled for Canada and one in England. And while the majority of the walks are during April’s Autism Awareness month, there are more walks scheduled throughout the remainder of the year as well.

If you can’t get out there and walk with us, but would still like to help out, log onto the Walk Donation Page. You can make a donation or sponsor your favorite walker or team. Teams and individual walkers can be searched for by state or by name.

So come get some fresh air, meet some very interesting people, and help raise awareness and funds for a worthy cause.

Carla has a passion for sharing the benefits of walking for health and sanity.

Welcome, come on in. Join in on the discussion whether you are a newbie or an experienced walker. You will find inspiration and motivation amoung members that enjoy the walking lifestyle.